People always say the remember where they were when memorable sporting events occurred. They say it like they are proud of themselves that they were, “in my grandma’s house when MJ made ‘the shot'” or “down at Chili’s, eating caso, when the Red Sox broke the curse.” I will always remember when I saw Manny Pacquiao fall from grace by a perfect counter punch by Jaun Marquez. 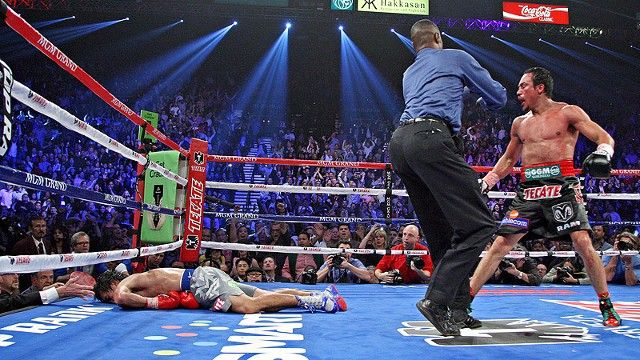 I was sitting on the fifth floor of the new business building on campus. I had finally found a suitable streaming site for the Pacquiao vs Marquez fight. I was looking at Pacquiao clothing online. Wondering what hoodie I should get, but I hesitated. There is no certainty in boxing.

I love boxing (see blog title) and Manny for what he has done for the sport. I had eagerly looked forward to watching Pacquiao’s electric style and Marquez expert defense. They had competed fiercely in their previous three fights; two going to Pac and one a draw. The fights were not without controversy (many say that Jaun won two of the three).

Marquez is largely underrated, he is not as flashy or exciting as Pac, or as marketable. He relies on his defense to generate offense. PacMan was being toted as one of the best fighters pound-for-pound ever. He was in the conversation of fighting the best pound-for-pound boxer in Floyd Mayweather. Pac was the center of attention of boxing for a long time. Rightfully so. He has won eight different championships in eight different weight class. The first and only one to do so. This fight would be the end all be all for Marquez – vindication or retirement (he is 39yrs old). For Manny, it would help cement his place with the all time greats and hopefully force Money Mayweather to fight him.

Vegas pulled out all the stops for the fight. 50 cent came down from the ceiling. Mitt Romney was there. The crowd, which was largely Mexican, was chanting Marquez’s name. Larry Merchant could barely speak. The excitement was palpable. And the fight lived up to the hype.

Both fighters looked prepared and strong. Manny attacked with a frenzied offense, while Marquez bruised him with his accurate counter punching. It was a furious pace for six rounds. Coming into the sixth round, both fighters had knocked each other down and it looked like Manny was gaining the upper hand. Then, in a moment, the fight ended and chaos ensued.

There was only a few seconds left in the round. Manny and Marquez were exchanging blows, with Manny usually winning out. During the final seconds, Manny came at Marquez with a simple right hand jab. It looked feeble, almost like a set up jab, or to score another point. Marquez dodged the ill thrown punch and hit Pac square in the jaw. He fell like a tree. For several minutes he laid on the canvas.

I couldn’t believe my eyes. I had seen Pac destroy De La Hoya, Cotto, Margarito, all reputable and competitive fighters. This couldn’t be right. The latter end of fights belong to Manny. Usually, Pac sets  a mean pace, then he hurts his opponent, and outlasts them. However, this time Manny got caught. It was like watching James Bond get killed, but this time it said ‘THE END’ immediately after, credits rolling. No way this could happen. This was the ‘hands are on the head’ kind of disbelief.

Boxing, unlike any other sport, immortalizes fighters and then, in a moment, strips them of their demigod glory. The sport blesses fighters unfairly, as it is judged by imperfect men. The only safe way to secure a victory is to knock the other person out. Unfortunately for Manny the boxing gods turned their head the other way and let him fall.

Manny’s wife shrieked in horror. Mexican fans threw plastic cups of beer in elation. Mitt looked confused. I couldn’t watch it anymore. I had invested too much into Manny for him to fail. I would never see Floyd get his mouth shut now, or even know. Pac should have beat Marquez.

The sport of boxing will survive. Hell, its been around for centuries, amid gambling allegations, dishonest promoters, drugs, murder, etc. Another legend will rise through the ranks. He will have speed and power. Fans and experts will be in awe at his prowess and ability. We will wonder how he would compete against the heroes of old. Then, like a shooting star, he will burn out. It could be in a punch, a grueling fight, an injury, something violent. Violence is the boxer’s unfortunate ending – which was also his beginning. It is a beautiful and cruel sport.

At least now Manny’s hoodie will be on sale……