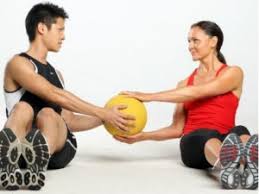 I swore I would never work out with my girlfriend at the gym. I wouldn’t mind running next to her, but there was no way we were going to do heavy lifting together. I thought those dudes were lame – Hey babe, take that 25 off and put on two 45’s. Changing the weights every time? Seems more of a chore than a workout buddy. Plus, I don’t want to lift with a girl that can beat me out. Chauvinistic? Probably, but my pride is still intact.

My attitude has change because of this morning.

This morning was the first time I had ever gone to the gym with my girlfriend. I wasn’t hating the idea as I had originally thought I would. I kind of liked that she wanted to listen to me and work out. It could be fun. We would bond like dudes. Right?

I set it up so she would do a separate exercise than me, but I could spot her when I was resting.

I went hard. I was red faced. Veins popping in my head. I had to prove to my lady that I was a man. I AM A MAN DAMMIT! The caveman inside of me was raging. He needed to pound a sabertooth down with a giant club.

There were a few problems with me though: 1) I hadn’t worked out in about a week, which is an eternity. Honestly. 2) I hadn’t eaten anything.

We worked out for over an hour. It felt good, but then, after our last exercise, I felt sick. I went pale. My mouth was watering like a broken water spicket. I knew it was coming — stomach acid/water/bad taste/ruined-teeth solution. I haven’t thrown up while exercising since high school, (Thats over six years ago) so I was in shock.

Plus, I sound awful when I throw up, it’s really loud. It’s like a bowling ball being forced out of my face. I threw up three times. Thankfully, it was the half a cup ones…. Little teasers. So cute when they do that to me. Where you stomach just contracts tight and you want to die.

She made a believer outta me. If you are single, take a girl on your first date to a gym. You will crush it.   Girls are the ultimate benchmark and motivator.