/ˈkwälətē/
Noun
1. The standard of something as measured against other things of a similar kind; the degree of excellence of something: “quality of life”.
2. General excellence of standard or level: “quality beers”.
“The college game is fantastic in terms of the drama, the fans are behind you, and the spirit, and the allegiance to your alma mater. The format of the tournament is brilliant,” said Steve Kerr, the former University of Arizona star who will call the games for CBS. “But the one thing that needs to improve is the quality of play. You don’t have the star player who will affect the quality of shots everybody else is getting. If Anthony Davis were still at Kentucky, across the board you would have better field goal percentage for the rest of the guys. Stars can change the game for everybody else. Mostly it is freshmen playing a much bigger role and not any stars to take the pressure off. Guys have to play before they are really ready.”

Entertaining is very different from quality. I think the ABC’s show Wipeout is funny, but isn’t quality like New Girl. That’s not a fair comparison. Look at the cartoons we watched as kids. Looney Toones, Spiderman, Doug, School House Rock, etc., now look at what kids watch now, Disney’s Club House, Sponge Bob Square Pants, and Dora the Explorer. If you are still confused, order a country stake from Denny’s, then order a steak a Ruth Chris. Both will satify the hunger pains, but you’ll taste the difference.
Let’s take our own visual and taste test.
Name a team in the past ten years that could beat the following teams’ starting five of the 1990’s, we could go deeper, but I don’t want to get into the debate of athletics or have too long of a list (think Wooden couldn’t have his Bruins smoke teams now?):
UNLV: Larry Johnson, Stacey Augmon, Greg Anthony, George Ackles.
MICHIGAN: Chris Webber, Jalen Rose, Juwan Howard, Jimmy King, Ray Jackson
KENTUCKY: Antoine Walker, Tony Delk, Walter McCarty, Derek Anderson, Ron Mercer
DUKE: Christian Laettner, Bobby Hurley, Grant Hill, Thomas Hill, Antonio Lang 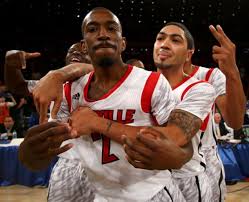 PAST TEN NCAA CHAMPIONSHIP TEAMS:
Siva & L’ville; Davis & Kentucky; Kemba & UConn; Singler & Duke; Physco T, Lawson & N.C.; Mario & KU; Jokim & Florida; Sean May & N.C.; Gordon, Oakafor & UConn; Carmelo & Syracuse?
I’m taking 90’s every match-up.
YES, it’s entertaining, but…
The game has remained entertaining, but better? I don’t think so. College basketball is entertaining because of parity; everyone likes Cinderella and upsets. It is part of human nature to root for the underdog. From the NY Times–
Indiana opened the season ranked first in the Associated Press top 25. Then Duke was No. 1. Then Louisville. Then Duke. Then Michigan. Then Indiana. Then Gonzaga. That’s right, Gonzaga, the small Jesuit university from the West Coast Conference, perhaps the most unlikely No. 1 in the recent history of college basketball — except, perhaps, in this season, when it made perfect sense. That the madness came early this year, well before March, should make for an excellent N.C.A.A. tournament, an event already among the most unpredictable in sports.
It’s not just the No. 1 ranking that switched teams like a dollar bill changing hands, moving from business to wallet to business, state to state. The top of the rankings proved predictable only in its unpredictability, like a game of Chutes and Ladders for the college hoops set.
Of the teams that started the season in the A.P.’s top five — Indiana, Louisville, Kentucky, Ohio State and Michigan, in that order — only Indiana (3) and Louisville (4) finished the regular season there.
Fourteen teams made at least one appearance in the top five but none for each week of the season. Georgetown, which fell out of the poll at one point, ascended to fifth. Kentucky, the defending national champion, dropped out entirely and did not hear its name called when the N.C.A.A. tournament field of 68 was announced Sunday night.
Coaches and players play musical chairs and exit so quickly, that no one can keep a hold on the ever- 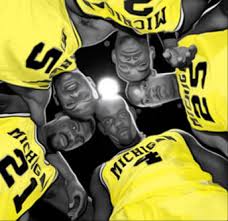 changing landscape. Look at Kentucky of last year. They won the national championship and then lost in the NIT. No way this should happen. The change in dogma of, “lets recruit and develop” to “recruit and ship out,” is the catalyst of this implosion.

From writer Jason Whitlock–
I see the parity and inconsistency found within the college game as yet another sign of American basketball’s ruination.
Greatness — team greatness — has been devalued by the popularity and influence of summer (AAU) basketball. Our youth basketball feeder system no longer promotes a culture of winning because summer basketball has replaced high school basketball as the most important route to a college scholarship and the attention of NBA scouts.
Moving forward, let’s call summer basketball what it is: The NCAA/NBA Combine. The best teenage players gather each summer and crisscross the nation in an individual skills competition disguised as basketball games. No one really cares who wins. What we really care about is who impresses.